RT @emwf: A reflection on the power of pop culture, dreams, disappointments, and self-determination, How to Fail as a Popstar… t.co/X2Dn3tdOoc


RT @emwf: Our first book club of 2021 is Return of the Trickster by Eden Robinson! She joins us April 15 for a conversation w… t.co/3uNyidteXS

REVIEW: HAVING AND BEING HAD 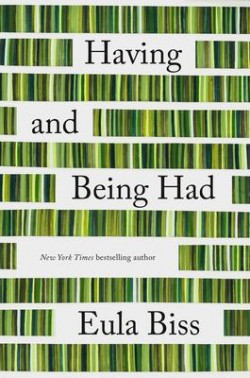 Having and Being Had

This is a book that brings life to the prefix “dis," which means apart. In short chapters, Eula Biss examines her own life and tries to crack open the varied and numerous circumstances that have prevented her from feeling good about her daily existence.

But hey, don’t let this description stop you from reading further as parts of the book are very funny and you may find her hitting the nail on many heads that may have also distanced you from really grasping the architecture of the world as we know it.

Biss is now a successful writer but it wasn’t always so. She was raised by a single mother of four children and they often dumpster dove for food. As she says, no one understands privilege as well as those who don’t have it. She felt much more whole growing up. When she went to university she hung out with artists doing things that she loved, so meaning was embedded in her days.

It wasn’t until her mid-30s when she actually got a job at a university that she and her husband could afford to buy a house. Feelings of existentialism immediately started fermenting. She became ensnared in the lust for having things while at the same time begrudged the amount of time devoted to working to support her new lifestyle.

She learned what the phrase "time is money" actually meant. Work and want more, but have less time to do what you really love. Having and Being Had.

Of course the large game she so piquantly describes is capitalism. She likens it to Pokemon where the participants playing do not really understand the rules but nevertheless are compelled to acquire (buy) more and more cards.

My four grandsons were all active Pokemon players. When I asked each of them if they understood the rules they all used the same two words: Not really.

One of her obligations in this enquiry is to be honest in these very personal investigations that she offers us. She even breaks one of the cardinal rules of civility by actually stating exactly what her income is. Although she is in the top 20 per cent of wage earners, she feels constantly skeptical and guilty about the game.

To understand having and being had, she read widely. There are 30 pages of books and articles referenced at the end. Marx of course, but Emily Dickinson, Virginia Woolf, Joan Didion, James Baldwin, John Kenneth Galbraith and a whole pantheon of others. They accompany her as she squirms at the conundrums that she gets caught up in – insurance, investments, property values, art, children, racism, marriage, feminism, friendship, consumption (which is another word for a wasting disease).

She and her cast of writers craftily elucidate the little white lies of this moment in history – a time in which many say the rules of the game have to change.