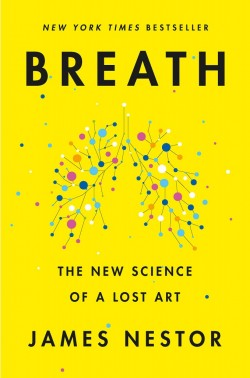 Breath: The New Science of a Lost Art

Last year I turned 71 and made my first ever New Year’s resolution: I bought myself a fountain pen, and resolved to start a book diary.

It’s been a pure pleasure and I now have a healthy and invigorating habit. In the spirit of revitalisation I discovered a reason for my second ever resolution.

I noticed that we were selling many copies of a book called Breath: The New Science of a Lost Art by James Nestor. It has an energetic bright yellow cover and after days of December grey I grabbed it. Nestor is a science journalist and has written for Outside, Scientific American, and the New York Times. His book Deep: Freediving, Renegade Science and What the Ocean Tells Us About Ourselves was a finalist for literary and science awards.

Nestory's study of freediving made him aware of how we could coax our lungs to a greater capacity. One of his teachers could hold his breath for eight minutes. Although this may sound just like a cool thing, it also has many positive ramifications for our beleaguered bodies.

Plagued by many health problems himself, Nestor studied texts both ancient and new. He delivers fascinating and vital stories about the thing that gives us life and graphs what has happened to the way we process this necessary function. He also takes part in some startling scientific experiments and relates his data firsthand.

The way we breathe has deteriorated since the industrial age. Ninety percent of people breathe incorrectly. Forty percent of the population suffers from chronic nasal obstruction. Fifty percent of people are habitual mouth breathers. Many modern ailments (asthma, sleep apnea, high blood pressure) can be reduced through breathing properly. Going from hunter gatherer to fast food consumer has done physical damage to our mouths, sinuses and nasal cavities. Everything began to shrink.

Nestor's absolutely crucial message is to breathe through your nose. Mouth breathing is a predominant factor as a lower indicator of health. The density of nasal hairs determines whether you will suffer from asthma. The lungs can extract more oxygen through nose breathing. Mothers in ancient societies closed baby’s mouths after feeding. Monks could melt snow around their bodies. There’s just a ton of interesting historical data.

Of course there are many ways to enhance your breathing. I’ve now watched a few on the internet. Did you know that when you breathe through your mouth you emit 70 percent more water droplets? Very bad in this era of COVID-19.