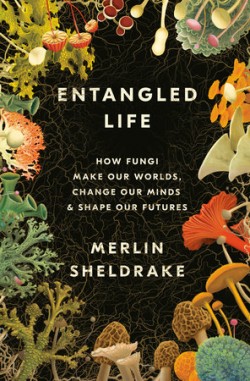 Entangled Life: How Fungi Make Our Worlds, Change Our Minds & Shape Our Futures

This is such a good news story!

Merlin Sheldrake fills Entangled Life with jouissance. He is a special breed person – one with both left and right brains firing at the same time and a superabundant vitality. We are the lucky recipients of his knowledge and life experience.

Sheldrake loves fungi. Their fruiting bodies are mushrooms. But what we don’t see or appreciate is their vast network under the ground called the mycelial network. Sheldrake estimates that there are 2.2 to 3.8 million species of fungi and only 8 percent have been identified. Most plants and trees depend on fungi to provide them with nutrients from the soil. The mycelial network connects acres of living material to the benefit of all organisms.

Let’s just briefly take a glimpse into the truffle world. The truffle is the most famous and most expensive of all fungi. It must arrive on your plate 2 to 3 days after it has been picked. It is unusual in that its fruiting body lies beneath the ground but its pungent smell is like perfume to boars and truffle hunting dogs. Needless to say there are lots of crimes in the truffle finding world. Sheldrake is such a character that like the Snuffleupagus, he has buried his own snout into the ground to find and enjoy the fruits of his obsession.

Lichens are a combination of fungi and algae. They lichenize at the slightest provocation, forming in less time than it takes a scab to heal. One in five of all fungi are lichens. When lichens travel back from outer space they can recover full metabolic activity in 24 hours after being rehydrated. In other words – they are really tough and resilient.

I’m with Sheldrake when he says that “Lichens colonized the surface of my mind years ago.” And how beautifully they colour our Canadian Shield!

Psilocybin or magic mushrooms have been in the news lately. Sheldrake is a big proponent. Magic mushrooms are now being used in experiments with people at the end of life. After a single dose, 80 percent of participants experience feelings of joy, bliss and interconnectedness and a substantial reduction in anxiety. Michael Pollan has written a whole book on this called How to Change Your Mind. Psilocybin slips into the workings of the brain by activating receptors normally stimulated by serotonin.

Fungi have persisted through the earth’s five major extinctions. Many forecast that we are now on the verge of the sixth. Sheldrake and others herald the fact that fungi can break down almost any substance from plastic to oil and can actively capture carbon. Certain white rot fungi have been found to reduce bee mortality. There are countless other examples from this knight in rotten armour! I predict fungi will play a huge role in our future!