REVIEW: LEAVE THE WORLD BEHIND 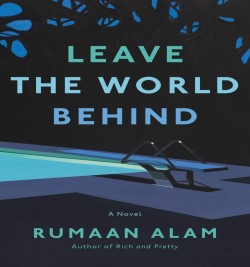 Leave the World Behind: A Novel

I was looking for relief from the barrage of bad information dumped on us daily when I came across a review which described Leave the World Behind as a “funny, terrifying end-of-the-world novel that is as 2020 as it gets.”

Admittedly, I am obsessed about the state of the world – my son even bought me a survival pack for Christmas last year – but my interest was immediately piqued by the word funny.

There are only seven characters in this novel. But this is definitely not a social bubble of their own making. An upper middle-class family from Brooklyn who live in an apartment seek holiday refuge by renting a house in the country. It is chosen after scrupulously scrawling through Airbnb. The house turns out to be beautifully appointed and in fact it arouses material lust in the renters.

But late into their first night they hear a knock at the door. This is scary for people from the city. But it turns out to be the rentees. They have escaped from New York City as the power has gone out and they instinctively fled to their own place of safety in the country.

We are deftly led through the threads of all involved: The renters – “you want us to leave in the middle of the night. My children are sleeping.” The rentees – ”I’m not saying you should leave! We can refund you say, 50 per cent of what you paid. We’ll stay downstairs.”

Rumaan Alam is so sociologically sophisticated. He nails the inherent eccentricities that come with race, class and sex. These little nuggets of insight are not only there for us to understand but also to enable us to further ruminate on our own entrapments.

When Clay, the father/professor asks whether the water does not run if the power goes off, you recognize how much trouble we are in as a society if things go off the rails. And every one of them is adrift and almost soulless without access to their cell phones.

There is so much brilliance in the telling. Foreshadowing of the future is subtle and very, very alarming. For me, there is a pivotal point in the novel. It has to do with the handyman and it foreshadows the future of the country to the south of us if their election goes badly.

See if you feel the same way.