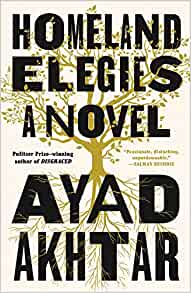 Homeland Elegies is a funny, illuminating and courageous book. Through a combination of memoir, fiction (all the details seemed plausible to me) and rumination, Akhtar, a Pulitzer Prize winning playwright and the author of American Dervish, dissects our collective, current North American moment, with its anger, frustration and cognitive dissonance. He achieves this through recounting episodes of his own life; that of an American son of Punjabi immigrant parents from newly carved out Pakistan.

Of course this story starts as it must, like our obsessions, with Trump. Akhtar’s father is a great booster for his new American life and its seemingly endless possibilities. He is a well-known cardiologist, an expert in arrhythmias. In the course of events, in the 1990s, he meets Donald J Trump as a patient, suffering from heart palpitations. He is flown to New York and housed in the Plaza. After confirming the benign nature of Trump’s ailment, the doctor becomes enamoured of Trump with whom he shares various behaviours – impulsive, sketchy investments leading to bankruptcy; even a fondness for certain high-end sex workers. And so, as 2016 approaches, the father and his increasingly incredulous son debate the merits of voting for Trump, with his crass misogyny, racism and utter mendacity.

Structured as a picaresque, through meetings with various characters from Akhtar’s life, the book cogently reveals the evolving nature of American society in its late capitalist phase. At the centre lies 9/11 and its ambiguous features for American Muslims subjected to the recurring suspicions and hostilities of other Americans. But the book also has much to say about how the increasing concentration of capital, with its relentless march towards globalization, hollows out the possibilities of locality, the middle class, transforming citizens into mere consumers and impoverishing them in the process. Here we come again to Trump, now seen as the reflection, even voice, of this disenfranchising system and the anger, racism and xenophobia that it engenders.

Finally, as all good stories must, this one ends with family, especially father and son. Beneath their conflict lies an irrational love and a differing solution to discovering what is home.