RT @davecollins41: @Bookshelfnews - VERY excited to get my order with @veschwab 's "The Invisible Life of Addie Larue". So convenient… t.co/TPWaNjfgUu


@irthlovin Thank you so much! We appreciate your support! 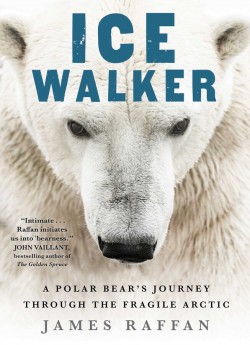 Ice Walker: A Polar Bear's Journey through the Fragile Arctic

Guelph-born author James Raffan started his career as a marine biologist. There, he implemented tasks like teaching an adult male polar bear to press paddles so that its spectral sensitivity could be measured. Finding it hard to cope with watching this magnificent animal slowly go beserk in captivity, Raffan switched to the natural sciences and has spent the last 40 years living part time in the far north. Lucky for us.

In his newest work he jumps into what is, for him, the unknown territory called creative non-fiction.

When I checked out the summary on the back of the book and read that he had given a mother polar bear and her cubs names and was embarking on a voyage of anthropomorphism, I was uncomfortable. Frankly, it sounded kind of stupid. But sometimes opening a book and reading a few pages can be a wondrous experience. Immediately my cynicism melted away and I was grasped by the profundity of Raffan’s writing.

I knew nothing about polar bears. Did you know that the temperature difference between the snow and the inside of the pad is sometimes 74 C? As she walks, our main character Nanu’s hind feet step perfectly and efficiently into the prints of her front feet. During mating season she is often mounted by more than one bear but physical stimulation of her loins facilitate the release of eggs to whomever has won the rutting battle. When she enters her winter home she could be pregnant with two or three cubs and during the next six months denning in the dark without food she grows the babies in utero, and produces milk which is 32 per cent fat.

As we travel with Nanu and her cubs on their yearly trek following the seasons, there is a miracle on every page.

Recently a friend told me that he cannot even look at a picture of a living polar bear without crying. I understand that emotion more deeply now. Nanu and her cubs, the seals, wolves, ravens, foxes, and Indigenous peoples who share a home are fighting a losing battle.

Climate change is unrelenting. We have lost track of the rules and intimate connections that used to govern. Raffan feels that we need to rekindle the knowledge that we have lost due to the economic system that we are all tied up with. This book will put a fire in your belly.

Don’t miss James Raffan in conversation with Wade Davis and Stephen Heighton on Oct. 1 at 8 pm for the most recent Eden Mills Writers’ Festival online.