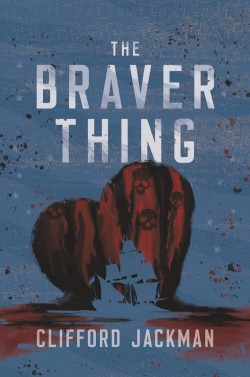 As Ishmael comes aboard The Pequod, he's asked by Captain Pegleg what takes him "a-whaling." The narrator of Moby Dick says, "I want to see the world."

Captain Pegleg welcomes the prospective whaler to step over the weather bow and take a peek, asks him to report back what he sees.

“Not much,” Ishmeal replies, “nothing but water.”

“Well, what does thou think then of seeing the world? Do ye wish to go round Cape Horn to see any more of it, eh? Can’t ye see the world where you stand?”

It's not necessarily the shared seafaring that had me recalling this exchange while reading Clifford Jackman's second novel, The Braver Thing--though Jackman does find that nice Moby Dick-ian balance between explosive action and banal labour that is (I assume) true to life at sea. Rather, it's the pull to consider this swashbuckling pirate caper set in 1721 timely that has me thinking of Ishmael beholding the all-at-once vast and unremarkable sea. In a novel organized by the movement from Aristocracy to Tyranny, it's easy to see Jackman's story as a reflection of the current times, maybe even a commentary on them. But the truth emerges after a year of honour and skullduggery and debasement is that history, much like the sea, generally looks the same no matter where you set out or what bow you peer out at it from. Usually, you can see the whole of the world, with all its human triumph and folly, from where you stand.

Set during the twilight of the age of piracy, The Braver Thing is a One Last Score adventure. As the captain of the Saoirse (meaning freedom), James Kavanagh, former shipmate of Blackbeard, has a plan that will set himself and his crew, Gentleman of Good Fortune all, up for life. As much as Jackman clearly loves the frothy and hobbling tradition of sea stories, his interest truly lies--a boon for the reader, really--in how law and order functions for the lawless. Before setting out, each pirate must agree upon articles, a structure of rights in the democratic model. The Captain and his Officers have authority whilst "in action"--either natural or manmade conflict--but otherwise the ship is governed by the Majority. Each pirate has a stake and each has a say.

As the pirates' exploits mount, though, so too do the exploitations of the Articles. More and more, the rules of order are used to foment disorder. "What a wonderful thing is the good of the Company!" mocks one pirate from within the fulcrum of a power struggle, "It can be made to suit any purpose." What is freedom for some will inevitably lead to the subjugation of others.

As he did with his almost gleefully brutal first novel, The Winter Family, Jackman upends any notion of good guys and bad guys. Any system of power or governance, flying under whatever flag, is subject to the misuse and perversion of its ideals. That the rich political tumult in The Braver Thing seems so relevant is less a comment on Jackman's prescience than it is in his awareness and articulation of the inevitable degradation of governmental idealism, his ability to check a broken clock just as it's telling the correct time.