Bookshelf twitter
Follow @bookshelfnews
RT @10Carden: How can we empower the young women in our community as the female leaders of tomorrow? Join the conversation May… t.co/hV7QCqCKVS


RT @YES_2_McElderry: This evening, if you’re looking for something to do. t.co/SJNPVyy7gs 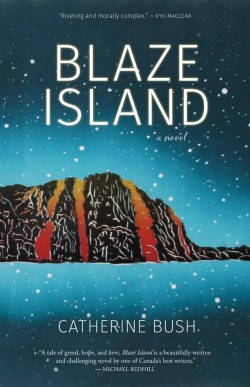 It's eerie and amazing how Covid-19 stopped nearly everything. Going for a stroll in early April, neighbourhoods were so still and empty it was as though a spell had been cast. When another person did appear, you were startled, crossed the street to avoid them. Of course, no one wanted to halt, and some were devastated by the abrupt cessation of "normal life," but Covid at least showed that it could be done, showed that what we consider to be modernity's infrangible status quo could, in fact, be recalibrated.

Now, six-or-so months from the outset of this global pandemic, as the disruptive has settled into the banal, it's hard not to ask why, if we can shut down to survive a virus, why we can't make similarly stark adjustments in consideration of climate change?

In some way, virus narratives, usually smuggled in with the zombie craze of the noughts, have informed us how to behave. Speculative fiction, whether it intends to or not, both instructs and predicts how a culture should act within unfamiliar conditions. By the time of Covid, we'd absorbed the idea of infection and avoidance. Culturally, though, we've been slower to accept and imagine the catastrophe of climate change, let alone how we address it or live within it. Beyond the spate of crappy, bombastic disaster movies, what will likely prove to be the defining and shaping issue of human life on earth from here on in has largely been avoided.

"For six years," writes author Catherine Bush in Canadian Notes and Queries, "I’ve been working on a novel that attempts to bring climate science and the climate crisis into a work of literary fiction alongside some of our existential habits of denial. I’m provoked by the question of what literary realism looks like at this moment, in the places I write from on this planet. How do I create a literature that feels real when so many aspects of the lives around me are premised on the most profound fictions: that we can continue to live as we do, those of us lucky enough to be able to privilege our short-term comforts and desires, indulging in the luxury of global mobility and the individual benefits of ideologies of growth and extractivism, while ignoring the profoundly destructive consequences of our behaviour, particularly for those who come after us? What does the project of literary realism, which for the last couple of centuries in the industrialized and capitalist West has largely focused on the interactions of individual human psyches within their social milieu, look like going forward? How do we represent our current reality imaginatively, and, if we’re going to grapple directly with the climate crisis in a literary work, how can we do so artfully rather than swinging about with an apocalyptic sledgehammer?"

Blaze Island is that novel, and amounts to a compelling and beautiful address to all of Bush's questions and concerns.

Set on the titular island (a stand-in for Fogo Island, the largest of the offshore islands of Newfoundland and Labrador) Bush's novel takes its structure from The Tempest. Here, the hobby magician and exiled Duke of Milan, Properso, takes the form of Alan Wells, a widower climate scientist forced into hiding by deniers hellbent on discrediting and destroying him. The daughter he strives to protect is Miranda and the rest of the cast makes for a game of spot-the-corollary. The present action takes place within the devastation of and the aftermath of a Category Five hurricane that, historically, would not have travelled this far up the eastern seaboard. The storm brings with it outsiders to the island whose identities and intentions are not always clear.

A critical or even passing familiarity with Shakespeare's play isn't a prerequisite for Blaze Island. As with most of The Bard's plays, most readers will inherit the narratives without having read them, and it's this familiarity that's important for the novel, whether direct or subconscious. In weaving our contemporary crisis into a classic narrative, Bush accommodates the need for recognizability when exploring a subject and reality that has yet to take significant root in the majority of minds. To refer to the climate crisis as contemporary is even wrongheaded, as immediate problems are still the products of past thinking and actions, and the ultimate product of a hubristic and domineering way in which we've long interacted with the natural world. It only makes sense that a present story should be so shored up by a past one.

Indeed, that past, and how it affects and is affected by the present, is the essence of Blaze Island. Every year, for instance, icebergs break off from the Greenland ice sheet and float south into the island's coves. The past literally unmoors itself and drifts into the present. In one later scene, Alan offers an ice cube to Frank, one of the strangers washed ashore in the storm, and explains the fizzing and popping  reaction of its being dropped in water. "That's little bursts of ten-thousand-year-old air being released," he says, "air that has far less carbon dioxide in it than ours today. In a sense, from where we are, in this room, staring at those bubbles, we're looking across the stretch of time in which humans have enjoyed a stable climate here on Earth." But as the shift in the climate releases the trapped, ancient oxygen, so too does it release all our own fusty pasts. The climate's changing and so must we in order to persevere.

While the novel thrums with metaphor meant to pad the jagged and harsh corners of climate fact, its true life is found in the tactile vivacity of the island itself. While Alan seeks to protect the island as more of a concept, as a way of life, Miranada experiences Blaze Island as fact. The fauna here is vivid and redolent, the dirt squishy and telluric. As necessarily bleak as the book might be in its stark look at our looming future--"We're in deep shit," as Alan puts it--it also revels in the beauty of the world at risk. Too, the magic on this island is a product of nature itself, be it the appearance of icebergs in the coves or the shuddering of old wallpaper with a breeze caught behind it. To fear for the demise of something, you need to truly love it first.

Our reality is changing, and so must our representation of that reality. Since our lives ground to a jarring halt, we've been hankering to have things return to normal in a way that suggests we've not processed that there's no normal to return back to, or that that normal itself was an illusion. As much as we need to "solve" the climate crises, we have to first address our stuckness. Bush gives a great yank here. In the famous end of The Tempest, Prospero asks that the audience free him and the other characters from the dream of the play. Blaze Island amounts to a similar request. To deny or ignore our changing world is to stay willfully dreaming.