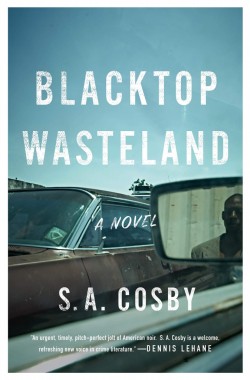 Praise for Blacktop Wasteland can't help but get wrapped up in driving images or similes. And certainly the book explodes at all the important points with thrilling chase scenes that manage to be cinematic while also keeping thrillingly literary. But none of these frenetic, gas-stinking action scenes work without the stillnesses of S.A. Crosby's novel. All the speed of the book is in the interest of arrival, all the starting for the sake of stopping.

Our pro- and (sometimes) antagonist is Beauregard "Bug" Montage, owner of a garage in Virginia that's been slumping into the red ever since his competition won the lottery. Retired from a lucrative career as a getaway man, making ends meet the honest way is proving harder and harder for the husband and father. In an opening scene that hooks the reader immediately, Bug finds himself "just outside Dinwiddie County ten miles from the fairground where legally sanctioned drag races were held." In his pocket he's got a grand that's still not enough to pay rent on the garage for a month. Pitting his Duster against an Oldsmobile that's more hyped-up than it is souped-up seems like a sure thing. He can double a hard-earned income from two weeks in sixty seconds. A little bit of his old life to supplement his new one. When the bet goes south, though, Bug has to tap a whole lot more of his old life than he'd like to. We get a glimpse of who Bug truly is, and who he's desperately trying not to be.

The canard of American exceptionalism drifts through Blacktop Wasteland like the reeking haze of burnt rubber. As Bug explains to his son, "When you're a black man in America you live with the weight of people's low expectations on your back every day. They can crush right down to the goddamn ground. Think about it like it's a race. Everyone else has a head start and you dragging those low expectations behind you." All Bug wants to do is provide a better life for his sons, to save them from the inheritance that came down from his own criminal father. It's stillness that he's chasing, security. More and more, though, doing the wrong thing looks to Bug like the only way to do the right thing. When the proverbial Final Score walks into his life, it's hard to turn down.

Blacktop Wasteland, in the end, is such a remarkable book because, for all the threat that comes from without, it's the conflict inside of Bug that drives it. For all Cosby's acumen with action scenes, it's the sort of moral drag race between Beauregard and Bug, always neck and neck, one pulling ahead, the other falling behind, but not for long, that makes this thriller emotionally rich and propulsive