Bookshelf twitter
Follow @bookshelfnews
RT @vivekshraya: Book is out today!!! “in honour of the stories of failures that are never expressed or published...” Join me for… t.co/jq2sOh5UPE


RT @GuelphToday: On The Bookshelf: The beauty and brilliance of Seth on full display in Clyde Fans t.co/jVj700CAwG t.co/uFgDWqBsWO


RT @guelpharts: "Seth, if you are reading this, I would like you to know how profoundly moved I was by Clyde Fans. I now understand… t.co/KcSyB9geY0 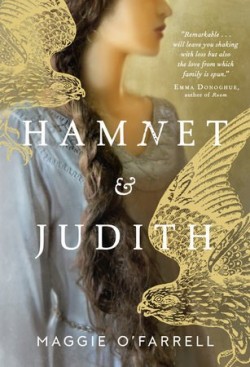 Hamnet and Judith: A novel

I picked up a review copy of Hamnet & Judith a month ago, read a few pages and then put it down. It just didn’t capture me. Then a few days later I read a stellar review in The Guardian which compared author Maggie O’Farrell to Shakespeare.

It’s sometimes true that if at first you don’t succeed try, try again, because Hamnet and Judith is simply a spectacular read.

Words on these pages act like a time machine that propels you back to the time of Shakespeare.

You leave this era of pandemic and enter the plague years of the 16th century where people fled the city for the country. Words which tear the curtain of time away allow you to be fully present in Stratford on Avon with William Shakespeare and his family as they live through all of their conflicts, challenges and sadness.

Although William is our person of interest, he is never mentioned by name and merely takes a supporting role. The story flows through Agnes, (often known historically as Anne) his wife.

She is such an extraordinary character, certainly a synesthete, someone who can see sounds, taste words or feel in their bodies, sensations ignited by their heightened sense of smell. The book is similarly rich in the sensual and intensely coloured emotionally.

Hamnet and Judith are the twin children of Agnes and William. The story begins on the day that the bubonic plague fills the body of Hamnet’s twin sister Judith. They are nine years old. Hamnet searches everywhere for the adults in his life but they are no where to be found, each off attending to the strenuous details of daily life.

It is Hamnet who actually ends up dying and of course setting the stage for the most famous of plays, Hamlet.

Allow yourself to be carried into the heath where Agnes gives birth to her first child and then into the streets of London where Shakespeare is building a repertory company amidst the chaos, grime, noise and debauchery of life in that packed city.

I’m still reeling from the impact of this book. Of course, you may choose not to read it, thinking it too sad. But then you will not experience the true sorcery of Maggie O’Farrell and the magic that words like these will provide in your life.

You will suffer the grief brought upon by the death of a child, but while reading Hamnet and Judith you will live the world as a synesthete with all of its colour and beauty and extraordinary energy.