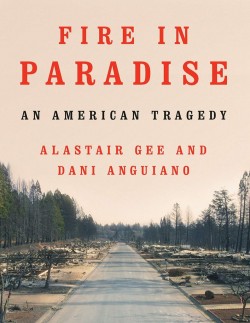 Fire in Paradise: An American Tragedy

Whenever I see hydro guys in their cherry pickers cutting off tree limbs I always think, Do they really have to do that? After reading Fire in Paradise I will never have this thought again.

Paradise, California, a town of 26,000 people was destroyed by an unprecedented fire in November of 2018. In the last five years, most California wildfires are started by trees falling or touching dying electrical equipment—equipment that had not been maintained properly. PG&E, the company responsible, became a by-word for negligence and corporate greed.

This was a fire that stymied over 300 fire engines, 11 helicopters, 24 bulldozers and hundreds of fire fighters. The winds were so strong, unlike anything any of the seasoned firefighters had ever seen, that the slurry of retardant dumped by helicopters never made it to the target. Spot fires metastasized everywhere. The heat of burning buildings ignited vegetation. No one imagined a fire of this magnitude. It was biblical.

At one point, hundreds of people were trapped in their cars trying to escape. But the long line of cars was going nowhere as there was only one road out and in. This fire emitted heat of 1500 degrees Fahrenheit—as hot as a crematorium. The evacuees were herded onto a sizeable melting tarmac and were told to lay face down while firefighters aimed water at the surrounding fire. This is called sheltering in place, very different than the sheltering in place we have all experienced in the last few months.

Evacuation was made more difficult because many residents were disabled or elderly and regularly took pharmaceuticals. The hospital had to be emptied—women in the midst of giving birth, men in wheelchairs. Acts of overwhelming courage surfaced everywhere. Individual stories shore up this amazing narrative. Parents didn’t know where their children were, wives couldn’t contact their husbands. Animals became brush for the fire.

Why do I read books like this? I think because they are a tribute to human endurance. And, in reading Fire in Paradise, I learned or was reminded of many things, one of which is that too many of us don’t value maintenance enough. It’s not a sexy place to put your tax dollar.

The details of the enormous task of cleaning up is an ongoing story. 50, 000 people were evacuated, 23,000 applied for financial help. The psychic toll will never be understood. We all understand somewhere in our being that natural disasters are coming to get us. Fire in Paradise is a warning bell and perhaps even a bit of a manual to help us cope.