Bookshelf twitter
Follow @bookshelfnews
RT @emwf: Our first book club of 2021 is Return of the Trickster by Eden Robinson! She joins us April 15 for a conversation w… t.co/3uNyidteXS


RT @RyersonCFE: TOMORROW at 4pm EST - Join us for a discussion abt Canadian Authors and Books: An Endangered Species? w/… t.co/k5uopg2727 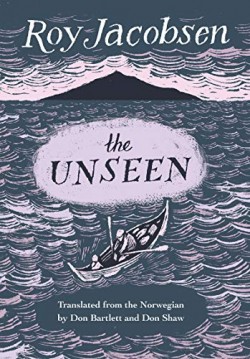 As things are beginning to open back up, and we're transitioning into new phases of imitation normalcy, I'll admit to a touch of nostalgia for the beginning of all this. Whether it was months ago or years ago that lockdown began, it's tough to say. It was a terrible time to which I never want to return, but that odd mix of boredom and fear-tinged uncertainty are all snarled up with, and maybe even elevated by, having read, in the midst of all that, Roy Jacobsen's wonderful novel The Unseen.

Set on the Norwegian island of Barrøy, Jacobson's novel--shortlisted for both the Man Booker International Prize and the International Dublin Literary Award--can be as laconic and brooding as its patriarch, Hans Barrøy, but it can also be as rich, wondering, and longing as Hans' daughter, Ingrid. Much of the novel concerns the daily and seasonal machinations of sustaining three generations of Barrøys on the island. As banal as some of the labour may be, the very profundity of survival limns the loving, practical descriptions of daily tasks.

There's an almost samsaric surreality to the cycle of years on Barrøy, as, all at the same time, nothing seems to ever change and everything seems to always be changing. The past and the future almost overlap, as the past, ancestral ways of doing things begins to require the intervention of modernity in order to maintain itselft.

My first weeks of isolation couldn't help but be refracted through the prism of Ingrid's own isolated life. The contradiction of life on Barrøy seemed to say a lot about life during COVID. There's a certain amount of safety to being stuck and sequestered, a certain import to being the guardian, the steward of something larger than yourself. But how long is only what you can see around you meant to be enough?