Bookshelf twitter
Follow @bookshelfnews
RT @emwf: A reflection on the power of pop culture, dreams, disappointments, and self-determination, How to Fail as a Popstar… t.co/X2Dn3tdOoc


RT @emwf: Our first book club of 2021 is Return of the Trickster by Eden Robinson! She joins us April 15 for a conversation w… t.co/3uNyidteXS

REVIEW: DEATH IN HER HANDS 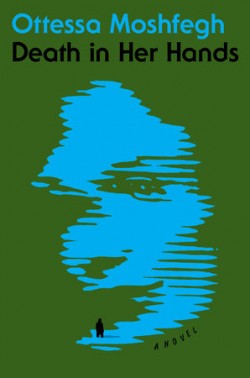 REVIEW: MY YEAR OF REST AND RELAXATION
REVIEW: HOMESICK FOR ANOTHER WORLD
Eileen: A Novel
Death in Her Hands: A Novel
Homesick for Another World: Stories
McGlue: A Novella
My Year of Rest and Relaxation: A Novel
While walking her dog through the birch woods that surround the new home she's made in a former summer camp, seventy-two-year-old Vesta Gul finds a note. It's in the middle of a path that, as far as she knows, only she ever uses. The paper, removed with care from a spiral notebook, is held in place with four black stones. The note, written with "the kind of neat, impersonal printing you'd use when making a sign for a yard sale, or filling out a form at the dentist," reads:

Her name was Magda. Nobody will ever know who killed her. It wasn't me. Here is her dead body.

There is no body on the trail, no sign of a crime. Vesta considers that the note could be a prank. Or it could be "the beginning of a story tossed out as a false start, a bad opening."
"I could understand the hesitation," Vesta narrates. "It's a rather dark, damning way to begin a story: the pronouncement of a mystery whose investigation is futile. Nobody will ever know who killed her. The story is over just as it's begun. Was futility a subject worthy of exploration? The note certainly didn't promise a happy ending."
Indeed, the note is the dark, damning first line of Ottessa Moshfeg's new novel, Death in Her Hands. Too, the novel was a false start of sorts: written years ago, before Moshfeg's breakout debut, Eileen, and shelved--or drawerered. While it may be a chronological predecessor to her other work, Death in Her Hands reads like a sure, articulate next step in her exploration and evocation of extreme interiority.
Both Eileen and My Year of Rest and Relaxation are narrated by either figuratively or literally isolated women whose profound and shocking depth hardly registers on their surface. Recently widowed and newly relocated across the country, Vesta is fully alone. She only has her dog and her husband's ashes. She goes into town for groceries only once a month, where she marvels at the slovenliness of the locals. Taking the note home with her, Vesta effectively welcomes Magda into her life. As her isolated mind spirals with all the different possibilities that the note and its placement suggests, Magda, purportedly dead, begins to come to life. Vesta tasks herself with both inventing and solving Magda's murder.
In her previous books, the tension between the mind of Moshfeg's narrators and the world they inhabit was kept fairly separate, and much of the impact of those books relied on that separation. Her protagonists are often spectators until they have no choice but to interact with their own story. In Death in Her Hands, however, the mind--or The Mindspace, as Vesta calls it--become superimposed on the world, and the distinction between what's in Vesta's head and what's real becomes increasingly complicated.
With many of us still isolating at home, Death in Her Hands offers a compelling--albeit troubling--example of just what sort of adventures we can have within our own imaginations.
Go To Literary