Bookshelf twitter
Follow @bookshelfnews
RT @volcanic_ashley: I haven’t missed an ep of @callyrgf since I started listening in 2015 so naturally I’m beyond excited to read… t.co/FsWunjEP7r


RT @MarionReidel: "Loops & Lattes" @Bookshelfnews has some wonderful Waterloo Wellington hikes in an around our city. Get out, exerci… t.co/2GkMsVJcmm 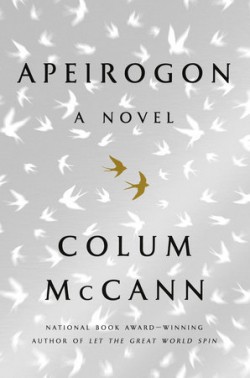 An apeirogon is a two-dimensional shape with an infinite but countable number of sides. It is the perfect metaphor for the conflict at the centre of Colum McCann’s new novel, a remarkable book about two extraordinary men, their families and their cause. Like many modern “novels,” these men are real, alive. Their cause is the seemingly intractable Israeli-Palestine conflict. Each point appears locked in its own isolated segment, but with the potential to reach any other part of the object, “even the seemingly impossible,” writes McCann.

Rami Elhanan is a 63-year-old Israeli, a seventh generation Jerusalemite, a veteran of several Arab-Israeli wars, and a commercial designer. In 1997, while shopping with her friends, his fourteen-year-old daughter, Smadar, was killed by suicide bombers on a street in Jerusalem. Bassam Aramin is a 45-year-old Palestinian, born in a cave in Hebron, southern Palestine. His home was destroyed by the Israeli Defence Forces, he became a Fatah militant, was imprisoned for seven years, but left prison to found Combatants for Peace, an organization of former Israeli and Palestinian combatants who are in non-violent struggle against the 53 year Occupation of the West Bank by Israel and its subjugation of the Palestinian people. In 2007, as she returned to school after buying some candy at recess, Bassam’s ten-year-old daughter, Abir, was shot and killed by a rubber bullet fired by an Israeli border guard.

Together, these men and their families have turned their grief into collective, courageous action to tell their stories—the tragic story of the Israeli and Palestinian people. Imagine the challenge required to make the leap from hatred and revenge. As a wave ripples out from the splash of a pebble, their story unfolds in a single day during which, together, they visit a monastery threatened with being severed from its associated convent by the Separation Wall. An ordinary day in that most fraught and angry region.

In this book you will learn much about the Holocaust; about the life of Palestinians under daily Israeli occupation, denied the smallest shred of human dignity; how the combatants are the victims in this struggle, mirror images of each other. Most importantly you will learn there are those who choose another path, a path of reconciliation, and what it is like to be on that path. You will be changed. “Home, brother,” they say to each other, “see you tomorrow.”