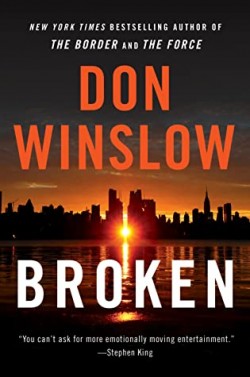 Broken
The Cartel
The Power of the Dog
The Border: A Novel
Don Winslow can get pretty heavy.
For instance, "Broken," the first novella in the new collection that bares its name, concerns revenge killings meted out by a New Orleans cop whose younger brother was brutally tortured by an up-and-coming drug lord looking to send a message. While there's heft in the story, the writing is always spry and lithe. Winslow's sentences crack like gun shots. When he gets going, the writing amounts to a sort of gritty, urgent poetry.
Thrillers these days tend to progress in bursts, 2- 3 page at a time. These short, just-one-more sections sometimes get called "potato chip chapters." Like with chips, it's hard to eat just one. And the next is so measly that, why not, another one couldn't hurt. By the end, you've finished a book or the bag in one sitting. All of Winslow's writing is like this, not just the chapters. You don't read Winslow so much as you chow down on him.
This sort of propelling, rapid-fire writing is viewed by some as trashy and rushed, but Winslow's spent a thirty year career getting his prose this lean. In fact, the breadth of Winslow's prowess is on display in Broken. He handles the grievous weight of "Broken" as deftly as he does the gentle quirkiness of "The San Diego Zoo"--which opens, "No one knows how the chimp got the revolver."
Coming off the completion of his Cartel Trilogy, a harrowing and brutal story of the Mexican-American drug wars, Broken is more often fun than hefty. Running the full spectrum of mystery sub-genres and influences, Winslow is clearly enjoying himself in these stories. But they're not just idle toss-offs. The way the hard stories interact with the fluffier ones points to a conflict throughout the whole. As a character comes to understand in "The Last Ride"--the final story of the collection, about a Trump-lovin' border agent--"the best part of ourselves is trapped inside the worst part of ourselves and just can't manage to get out." Each of the six stories in this collection struggle with braid of good and bad in every person, in every situation.
If you haven't read Don Winslow yet, Broken makes for a great introduction. If you're an ardent fan, then you're probably not reading this, because you're reading the stories instead.
Go To Page Turners & Pot Boilers