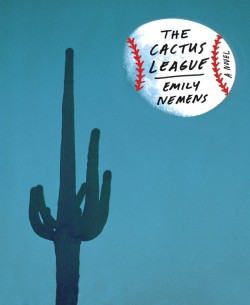 The Cactus League: A Novel

The return of baseball is as sure a sign of spring as wearing the wrong coat for the weather and melting snow heaps revealing scatters of curbside cigarette butts. There's still talk of salvaging the 2020 MLB season, but as the world we wake up in becomes more different from the one in which we went to sleep, it's tough to imagine there will be any baseball this year. Without it, spring won't quite feel like spring.

I'm no die-hard fan of the game, but I've had baseball on in the background all my life. As much as some might have their blood pressure raised over the competition of any sport, I think it's reliability, above all, that ball fans gravitate towards. From the incessancy of its season schedule to its structure of balls and strikes and innings, baseball is especially ticketyboo. It's cyclical, always looping back in on itself. It's nearly literary in its design, outright Aristotelian. A batter sets out from home and works towards a return by the end. The fan, like the reader, goes on the same journey.

If you're like me, you're not necessarily missing the actual competition of the MLB season, but the feeling of it. The sound-machine-while-you-sleep comfort of the game. If that's the case, once you're done watching old Jays highlights on YouTube, you couldn't do much better than Emily Nemens's The Cactus League. There's little actual gameplay in the novel, but, God, does it ever feel like baseball. If we can't be on the team bus this spring, we may as well be huffing the fumes.

There are two spring training leagues. There's the Grapefruit League, out of Florida, and the Cactus League, based in Arizona. Nemen's novel follows the spring training season of the fictional Los Angelas Lions, their first in their new training facility in Scottsdale, Salt River Fields. "Take it all in--" writes our narrator, an unnamed sports writer covering the 2011 spring season from the winter of his career "--the crisp-chalked diamond, the ruddy arc of infield, the bright checkerboard of the outfield. It's not easy to grow grass like that in the desert--I offer a hat tip to the grounds crew."

A veteran of covering the sport, our narrator knows what goes in to each nine innings of baseball. It's not only the grounds crew he tips his cap to in the nine connected stories that make up The Cactus League, but to all those in the periphery: the batting coaches, the security guards, the concessions workers, the baseball wives and the baseball mistresses. "There are so man men playing together," he writes, "so many more behind the scenes, coaching and cajoling and sometimes sabotaging the game's progress, pulling the line until it goes bonkers, more like a dance chart than any sort of arrow."

As with any professional sport, the game came can't help but be about its name players, but in this case, the troubled star of the Lions, Jason Goodyear, threads throughout the stories, but rarely gets up to bat. But in true all-star fashion, he is both supported by and defines the whole team of players and workers and characters around him.

"Inside baseball" is a colloquialism that describes any expert knowledge, and that's what The Cactus League reads like. Editor of The Paris Review, Nemens's captures that combination of chirpy gossip, deep history, and cold statistics that gives baseball its particular accent. For its ubiquity in North America, there's very little fiction around the sport. But its the strength of Nemens's novel, not its rarity, that puts in league with such classics as The Natural and The Art of Fielding.