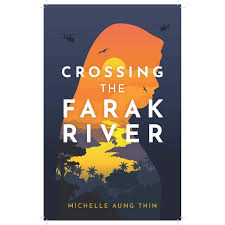 Crossing the Farak River is a story about a Rohingya family getting separated while on the run from the Myanmar Army (also known as Sit Tat). 14-year old Hasina is the main character and she is very responsible and smart. She is forced to take care of her younger brother Araf and her cousin Ghadiya on her own, after Sit Tat soldiers came to her village. She must supply them and herself with food, water, and shelter while they hide until her father finds them.

I would recommend this book to kids around the age of 12-14. This book has some difficult words throughout it and might be a little hard to understand for some younger or more inexperienced readers. Overall, it was a great book. The thing I liked most about it was the suspense. I would finish a chapter and close the book and then I would open it right back up again and say to myself, “I can’t just leave it there, I have to read another chapter!” Then, I would spend a few minutes debating whether I should read another chapter or not because I wanted to know what happened next. The author did a great job of descriptions, such as how the characters felt and the kinds of situations they were in. I really liked this book and I would rate it 9/10!