Bookshelf twitter
Follow @bookshelfnews
@BookRiot Hmmm.... We do! We have a bookstore, cinema, kitchen, bar and performance venue. We have also been known… t.co/sa65J8ykfd


@LiteraryHoarder Ha! Little did they know.... thanks for sharing!


RT @MarionReidel: I'm reading "Consider This" by @chuckpalahniuk . Great insight into good writing. Got it @Bookshelfnews. Here's a… t.co/aEjMbwfmet 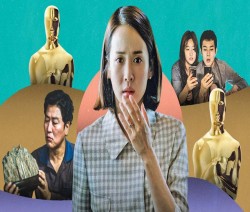 Winner of Cannes 2019’s top prize, Palme D’Or, Bong Joon-ho’s Parasite “begins, in deceptive fashion, as a darkly comic drama about a poor but extremely resourceful family of four, whose sly survival tactics may remind you of Hirokazu Kore-eda’s Shoplifters. When one member of the family gets a job as a tutor in a wealthy household, it sets in motion an ingenious chain of events that Bong tracks with steadily mounting tension and clockwork precision. As an escalating freak show of tension, surprise and class rage, Parasite would make a terrific double bill with Jordan Peele’s Us, which it matches and perhaps even surpasses in pact. Bong’s movie may be the angriest, most confrontational thing I’ve seen in the competition (at Cannes), the rare parable of haves and have-nots that connects viscerally as well as intellectually.” - Justin Chang, LA Times. In Korean with subtitles. Recommended.