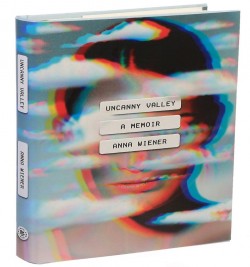 I must admit that one of the big reasons I thoroughly enjoyed Uncanny Valley is that it validated all my biases about Silicon Valley.

For years I have been moaning that the world is being reorganized by young men in their 20s who feel entitled and responsible for creating the zeitgeist of our future world and also that these minds are hard at work creating another app to get us dinner faster, instead of addressing issues such as climate change.

I actually don’t even know anyone who works there, but Anna Wiener does and she brings this burgeoning world to life with wit and wisdom. I feel validated!

Anna started her career with in a New York publishing company and although she loved the world of books and ideas, she was poorly paid (nothing new there). After a couple of years she was forced to look at her future – one in which she would be living with roommates in cramped housing forever and worried about health care and her 401K. A friend seduced her to California, the bubble of tech and all its perks.

She was hired pretty quickly by a search engine start-up and landed in a world where co-workers, almost all men, had no art on the walls, but lots of fridge magnets, deployed internet slang as if it were a vocabulary, used acronyms instead of words, drank wine out of jam jars, lived in their fleeces, bowed down to the 25-year-old founders as if they were kings (many became billionairs before they were 30) and constantly biked, skate-boarded, ran, all the while talking about the latest in bike, climbing and hiking technology.

Also, these influencers constantly used garbage language like “leading edge solutions” and “value prop” as if it were the gold standard for superior communication.

It took a while but eventually this hot house of technology and misogyny weighed her down.

The sense of her own disposability (ingrained by the publishing industry) was even exacerbated by the fact that (a) she was a woman in tech and (b) was a lowly customer service representative, not one of the anointed engineers who lived and breathed algorithms.

Wiener began to recoil at their fetishized lives which proceeded without friction and to miss her inefficient life in the world of the arts. She even felt guilty that she could command a six-figure income without being able to do anything.

There is a lot of humour in this book.

Wiener never refers to the real companies by name, just descriptions like “the social media company that everyone hates."  But she finally has to face the fact that she was facilitating people with feral careerism becoming billionaires, helping them replace authentic small businesses with global brands, forcing many to leave their homes in cities with skyrocketing rents like San Francisco and Seattle.

This was and remains the kicker. These very same people are at this very moment insisting that they can and should design the cities of the future. Think twice, Toronto, before you give Google and Sidwalk Labs the keys to your city.