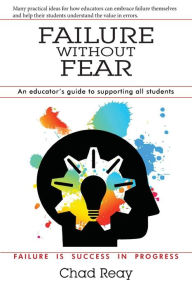 Join Chad Reay in the bookstore Sunday, February 16th at 2:00 pm to discuss his book, Failure Without Fear: An Educator's Guide to Supporting All Students.

No admission, books available for purchase.

Chad Reay is an administrator with the Upper Grand District School Board in Guelph, Ontario, Canada. His career in education began 15 years ago with teaching qualifications from Wollongong, New South Wales, Australia. Chad started as a Child and Youth Worker in a custody facility working with at-risk students. Since then he has worked as a classroom teacher with students from Kindergarten to Grade 8. Chad has been an elementary Curriculum Leader supporting educators as an instructional coach in the areas of Equity and Inclusion, FNMI, Student Success, Science and Technology, and English as a Second Language. He also had the opportunity to work with the Perimeter Institute in Waterloo, Ontario, to write and design cross-curricular math and science units for grades 5 to 8.  Working with the Ministry of Education as a Student Work–Study Teacher, Chad has done grassroots research in numeracy and literacy by working alongside students to help them identify gaps and suggesting strategies to close those gaps. From all these experiences, he has developed his philosophy that failure is just another form of fertilizer that helps us grow and learn.

About the book from the publisher, Word & Deed Publishing Ltd:

Nobody wants to fail, and NOBODY wants to be considered a failure. But what if we reimagined failure as something positive? As merely an essential part of experimentation? What if our education system thought about failure the way inventors do? Or as Thomas A. Edison once put it, "I have not failed. I've just found 10,000 ways that won't work." Failure Without Fear proposes that failure should be viewed as an opportunity and that the consequence of failure shouldn't be a poor grade, it should be growth. Author Chad Reay encourages us to fearlessly alter our perceptions of, and relationship with, failure so that we don't set young people on the wrong foot, believing that they should succeed from the get-go rather than failing many times first. This book is essential reading for parents, educators, and anyone else who needs to be liberated from the paralysis of fearing to fail instead of daring to try.