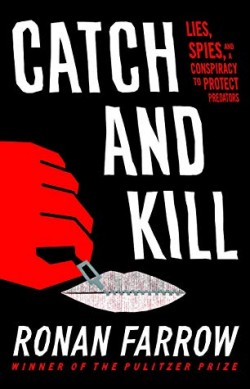 Catch and Kill: Lies, Spies, and a Conspiracy to Protect Predators

I imagine someone will soon be making a movie about fallen Hollywood magnate Harvey Weinstein's relentless and abusive pursuit of young women. It certainly won’t be the Weinstein Corporation producing it – they are now bankrupt – but a conglomerate of powerful and committed female actors could certainly gather their money and authority and lay it all out on the table – just as Farrow has done in his exposé Catch and Kill.

Weinstein’s case will be brought before the courts in New York City this week. It took five days to vet a jury. Wheeling his walker into court every day, Weinstein looks weak and unhealthy, but the public statements made by his lawyers reflect his absurd arrogance. One of his lawyers, Donna Rotunno, blamed his accusers, telling the ABC news program that in "circumstances where women don’t want to take certain responsibilities for their actions, we infantilize ourselves.” Well, literally hundreds of women with direct experience would beg to differ.

Farrow is the son of Mia Farrow and Woody Allen. At the outset of Catch and Kill he admits that he comes by his obsession with this case honestly, as he does not feel he supported his sister enough when she had accused their father of sexual childhood abuse. But Farrow has also won accolades for his actual work in both TV and print journalism. In 2018 he was awarded the Pulitzer Prize in Journalism for his work at the New York Times.

This is such a messy, layered tale that I won’t go into the crushing details, only lay the groundwork: in the beginning, Farrow and another TV producer were given the green light by NBC to produce a series on abusive behaviour in Hollywood. Very soon it became obvious who the biggest monster was. Over the years, a myriad of young women who dared speak even a little bit of their truth about Weinstein either lost their jobs or had their careers stonewalled. The producer was used to getting his way. Shortly after Farrow started his investigation, Weinstein hired an Israeli private intelligence agency called The Black Cube. Everyone, including Farrow, felt threatened.

“Everyone” even included the bosses at NBC who received countless calls and emails from a raging Weinstein. A project that was originally championed was given obstacle after obstacle until it was finally dead. Farrow, who had spent months catching all of these sordid details, had his story killed. Harvey Weinstein knew how to threaten everyone and he never stopped.

Thankfully, there are a few heroes in this ongoing drama. Farrow took his work to the The New Yorker. David Remnick and staff never wavered in their support and eventually published the story. Rachel Maddow was one of the few TV personalities who would not let the bosses at the top – in this case, MSNBC – tell her how to interview Farrow. They of course were worried about their own problems with their very popular host Matt Lauer whose behaviour Farrow also shines a light on. Lauer was fired in November 2017.