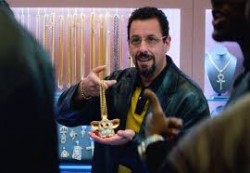 Uncut Gems
Against our good judgement, in defiance of our better angels, we root for the best of Adam Sandler's nincompoops. The way a cat mewling an imitation of a crying baby triggers and exploits us, there must be something about Sandler's gibberish-dripping mug that elicits our basest sympathies.

The SNL-alumn's ability to have his audience loathe him and want good things for him all at once makes him perfect lead for the Safdie Brothers new frenetic, scummy race to the bottom, Uncut Gems. Howard Ratner is a jeweler and a professional gambler that only a mistress could love. He grins, stammers, simpers, and seethes. Close your eyes as Howard is being shaken down or roughed up by any of the host of goons he's indebted to, and you may as well be listening to a track off Sandler's 1993 album They're All Gonna to Laugh at You.

As with the Safdie's breakthrough, Good Time, Uncut Gems picks up a punishing speed immediately and doesn't stop until its forced to. A buried man who believes the only way out is to dig up, Howard has ostensibly found the solution to all his problems with the purchase of a in a black opal from Ethiopia. Once auctioned off, it will be Howard's windfall. On the eve of the auction, though, Howard--a man who runs on risk--loans his glittering way out to basketball player and prospective client Kevin Garnett.
Over a flagellating two hours--self- and otherwise--Howard rushes splay-footed and gulping through New York City, scrambling to douse the flames of one conflict with the accelerant of another, trying to pay off old debts with new bets. As with Sandler's career of buffoons, even though Howard's largely the architect of his own misery, we want Howard to win. ("This is how I win," he assures us, after all.) A familiarity with Sandler might even prime us to expect him to succeed against the accruing odds. There's something about Sandler that gets us to root for him as though we've got money riding on this bad bet of a person.
Go To Reviews