Bookshelf twitter
Follow @bookshelfnews
RT @cibabooks: As if there weren’t enough reasons to #ShopLocal, here is one more: our #CIBD2021 Contest for Book Lovers! Ever dre… t.co/0YUVShFXip


RT @cibabooks: Was there ever a better time to #ShowTheLove to indie bookstores? 🧡 Thank you to everyone who sent in their love no… t.co/wLVW19fCJ2

Beverley McLachlin's Truth Be Told: My Journey Through Life and the Law is 20% off today! (Dec 22) 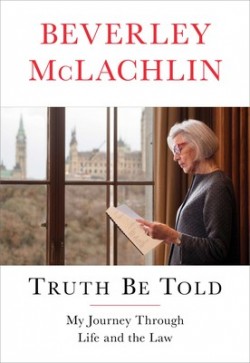 Truth Be Told: My Journey Through Life and the Law

Truth Be Told: My Journey Through Life and the Law

About the book from the publisher Simon & Schuster:

Former Chief Justice of the Supreme Court of Canada Beverley McLachlin offers an intimate and revealing look at her life, from her childhood in the Alberta foothills to her career on the Supreme Court, where she helped to shape the social and moral fabric of the country.

As a young girl, Beverley McLachlin's world was often full of wonder-at the expansive prairie vistas around her, at the stories she discovered in the books at her local library, and at the diverse people who passed through her parents' door. While her family was poor, their lives were rich in the ways that mattered most. Even at a young age, she had an innate sense of justice, which was reinforced by the lessons her parents taught her: Everyone deserves dignity. All people are equal. Those who work hard reap the rewards. Willful, spirited, and unusually intelligent, she discovered in Pincher Creek an extraordinary tapestry of people and perspectives that informed her worldview going forward.

Still, life in the rural Prairies was lonely, and gaining access to education-especially for girls-wasn't always easy. As a young woman, McLachlin moved to Edmonton to pursue a degree in philosophy. There, she discovered her passion lay not in academia, but in the real world, solving problems directly related to the lives of the people around her. And in the law, she found the tools to do exactly that.

She soon realized, though, that the world was not always willing to accept her. In her early years as an articling student and lawyer, she encountered sexism, exclusion, and old boys' clubs at every turn. And outside the courtroom, personal loss and tragedies struck close to home. Nonetheless, McLachlin was determined to prove her worth, and her love of the law and the pursuit of justice pulled her through the darkest moments.

McLachlin's meteoric rise through the courts soon found her serving on the highest court in the country, becoming the first woman to be named Chief Justice of the Supreme Court of Canada. She rapidly distinguished herself as a judge of renown, one who was never afraid to take on morally complex or charged debates. Over the next eighteen years, McLachlin presided over the most prominent cases in the country-involving Charter challenges, same-sex marriage, and euthanasia. One judgment at a time, she laid down a legal legacy that proved that fairness and justice were not luxuries of the powerful but rather obligations owed to each and every one of us.

With warmth, honesty, and deep wisdom, McLachlin invites us into her legal and personal life-into the hopes and doubts, the triumphs and losses on and off the bench. Through it all, her constant faith in justice remained her true north. In an age of division and uncertainty, McLachlin's memoir is a reminder that justice and the rule of law remain our best hope for a progressive and bright future.

Beverley McLachlin was the Chief Justice of the Supreme Court of Canada from 2000 to 2017. She is the first woman to hold that position and the longest-serving Chief Justice in Canadian history. Born in rural Pincher Creek, Alberta, McLachlin studied philosophy and law at the University of Alberta before being called to the bar in 1969. After teaching at the University of British Columbia, she was appointed a judge in 1981. Throughout her prestigious career, she has served on many courts, including the County Court of Vancouver, the Supreme Court of British Columbia, the British Columbia Court of Appeal, and the Supreme Court of Canada. In 2019, McLachlin became a Companion of the Order of Canada, the highest honour within the Order. Her first novel, Full Disclosure, was an instant national bestseller.